Pictured above is our newest full color card. Top left is Crystal-N5LEQ, Steve-KW5V and Ben-NI5B in front of the cabin. Top right is Bob-N5KF. Bottom left is also Bob and the bottom right is Tony-VK3JED. These were taken at our cabin in McDade, TX 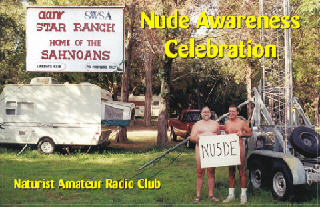 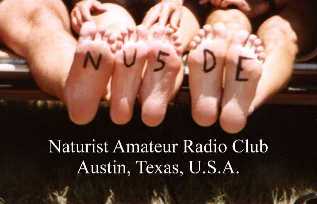 This is our "Original" QSL card, "the feet".  We always operate barefoot.

In the spring of 2012 our "Barefoot" card won the ARRL West Gulf Division "Most Humorous" Category for QSL Cards. We appreciate the club  trustee, N5KF, for submitting the card and the Division Directors for awarding the honor to the Naturist ARC. We recently ordered another box of 1000 of our "Feet" cards.

About the Naturist Amateur Radio Club

The interest in Ham Radio and Naturists/Nudists seemed to start in the early 90's (maybe even earlier?). Ham Radio operations during Nude Recreation Weekend started in the early 90's as well. One of the first efforts happened from Hippie Hollow, a clothing optional county run park in Austin, TX. A long wire was run along the cliffs, just a short distance from the shoreline. The rig was run using a couple of heavy duty batteries, but contacts were few and far between, mainly due to the poor location. A vertical was also use at one point, but still limited contacts. The call sign used belonged to Bob, KF5KF (at the time). After little luck from Hippie Hollow, the decision was made to operate from Star Ranch Nudist Resort, about 40 miles from Austin in a little town called McDade, in Central Texas. Bob operated from his house during the week and on the weekend he moved his equipment from home to Star Ranch. This caused a dramatic increase in the number of contacts. Bob changed his call sign to N5KF in the fall of 1996. This call was used in July, 1997 from Star Ranch.

In the fall of 1997 the Naturist Amateur Radio Club obtained the vanity callsign of NU5DE. Contacts were made with the new call starting immediately from the trustee's house, as the club did not have a permanent site at the time. The first Nude Recreation Week with the new club's callsign took place in July, 1998. We have been on with the club callsign for Field Day, during CQWW WPX and other contests and during nude events since 1997. The Naturist Amateur Radio Club are also members of the F.I.S.T.S CW organization with club number 8050.

Our first years operating from Star Ranch meant limited antennas, usually a G5RV or trap vertical on the ground. Even so, we managed to record a good number of contacts. First time we operated from Star Ranch was from their club house. Other than getting into their phones, the operation went well, with a couple of hundred contacts We did this for a couple years. For the next 2 years we operated from a house on the property, a higher location than the club house. Again, this was mostly a weekend event, the second weekend in July. Still, we used a G5RV and trap verticals. For the next 4 years, 1998, 1999, 2000 and 2001 we operated from available trailers located on the grounds of the nudist resort. In 1999 we moved up to an A3 beam at 40 ft. borrowed (and later purchased) from the Williamson County Amateur Radio Club. Our totals went up dramatically. We also started operating all week from the resort as well. Bob, N5KF took a week of vacation to dedicate to this project, operating the second week of July every year. In 2000 and 2001 we operated from our own campsite with a borrowed travel trailer. We used a "tower on a trailer" (seen in picture QSL above) with electric motors to elevate the tower from horizontal to vertical and another electric motor to raise the beam from a nesting height of 20 ft to 40 ft. Of course the tower could of handled stacked mono-banders and then some. It was a one-man operation, which was nice. Unfortunately we could not leave the trailer at the site. Many thanks to Mel for the use of the trailer and towing it out and back for 2 years.

For 2002 the club purchased a used 40 ft aluminum self supporting tower. Bob, N5KF, handled all the work, digging the 4' deep hole, and adding 40+ bags of cement. Work started on the project in the fall of 2001, first getting permission to erect the tower from the board of directors at Star Ranch. After countless hours, the beam finally went up on the tower the middle of May 2002. There is also a Folded Dipole, a trap vertical, and a push up pole with a 6 Meter vertical for additional antennas. The tower currently supports a 3 element HF beam, a new Cushcraft A3. We also have 2 meter and 440 verticals off the side of the tower pointed to the Austin area for local repeater work.

For 2004 the club invested in a 10 ft by 16 ft "cabin" to operate from at our site. Unfortunately the small travel trailer that we had used for the last few years was no longer available. This cabin actually gives us more operating room than the travel trailer, but for an additional cost. During 2004 club members added insulation, drywall, and a raised ceiling to make it a "home". The cabin sits on the same site as the former trailer. It is now fully outfitted with a beautiful desk, microwave, dinning table, a comfortable bed and of course air conditioning. Rigs are brought out by members as needed for operating.

For 2008 the club invested in a beautiful 31' fully equipped travel trailer. The trailer is located next to the operating cabin and will allow for more sleeping and cooking. The trailer was previously owned by a local ham, W5QHT, who sold it to the club trustee for a good price. In 2020 the trailer was updated to a 32ft Coleman, with a large slide out, and a couple of extra bunks. We also added a carport over it to help protect it from the strong Texas sun.

We appreciate the board of directors at Star Ranch for their support of the club and working with us in the installation of the tower, cabin and trailer. More information about Star Ranch can be found at www.starranch.net. The club is the oldest nudist resort in Texas, celebrating over 60 years! The club is open 365 days of the year with activities during the week and weekends all year.

NU5DE is on the air most weekends throughout the year, usually on 20 meters. Please give us a call if you hear us calling CQ from the cabin in McDade, TX. We usually operate in the General Band, around 14.265. We try to be on for the North American QSO Party in January, The CQ WPX Contest (Phone and CW), The AANR Nudist Conventions in the summer, Field Day, (solar/battery or generator power), Nude Recreation Week in July and the Texas QSO Party in September (Bastrop County). We have won 1st or 2nd place for a number of years in the TQP.

We appreciate all those who have worked us in the past and look forward to new contacts (and friends) in the future. We do the best at 100% return on QSL's, but do get behind at times. Please, a SASE is really appreciated. It also makes for a quicker return. You can QSL to the trustee, N5KF or the club's address in McDade, below. We are good on QRZ.com. If you have sent a card and SASE, and received no reply, there is a chance your card may have not been filled out correctly, usually with the wrong date or time. We search our thousands of contacts to try to find a match, but at times we still don't. Drop us an email with the correct information and we will check again.

Please note - We are keeping our page on QRZ.COM up to date. Please check there for all the latest and greatest happenings from our little club at Star Ranch Nudist Resort in McDade, Texas.

We are on Skype as NU5DE_TX  Please stop by and get a conversation going.